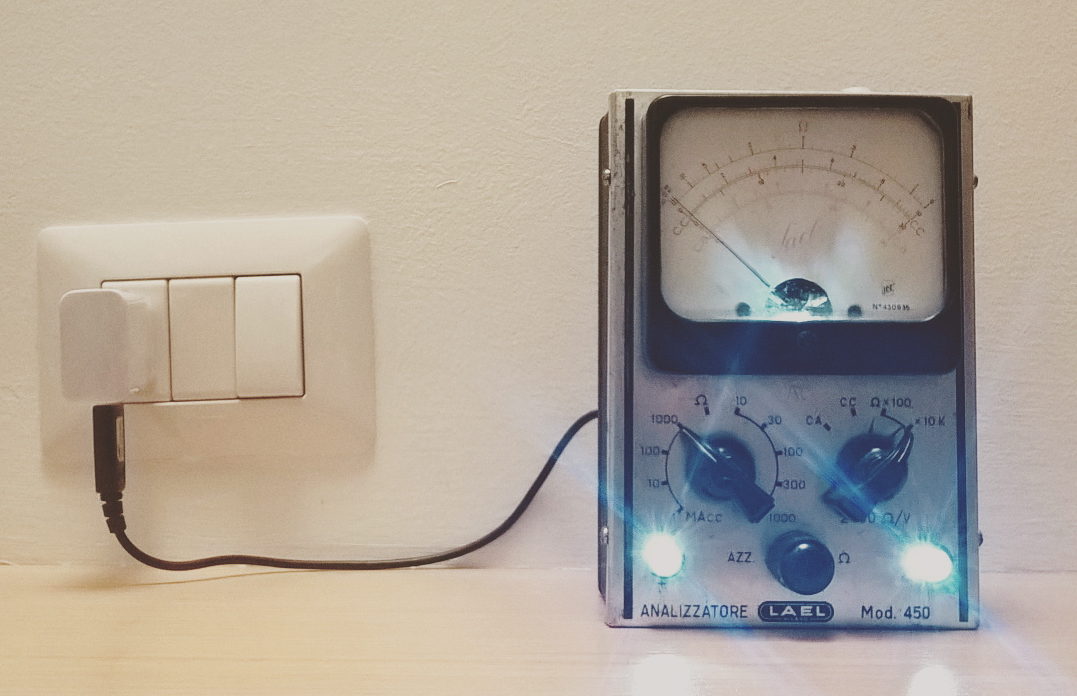 Retrofitting of a vintage Lael Tester from 1955

Asking my friends if anyone had a voltmeter to lend me, I received an old “Analizzatore Lael 450” built in Milan in the ’50s, it was not working, but very nice. A beautiful dead object.
When I tried to return the owner told me: “Keep it! it was my father’s tester, but I don’t need it and it doesn’t work“.
I kept it for a year, then I decided to turn it into something useful. Now it’s my morning alarm, a clock and night light. It’s connected to the Internet, it’s based on Arduino Nano and ESP8266-01.

At every hour during the daylight time it makes some random sound, like a cuckoo clock. It has an alarm clock with crickets’ sounds that can be configured with a smartphone. In darkness it turns on light when detect a movement. With light, if it detects a movement, tells the time with the needle and with some notes (with a bit of training it’s easy to understand it). Every day check the correct time from Internet.

Other functions as funny sound activations or force Access Point configuration or test mode are activated by switching the right old knob.

This is a collection of notes.

Reverse engineering of the old knobs

The front of the box that encloses the tester has two knobs that I wanted absolutely reuse, as well as the needle which moves to indicate the value of the voltage.
The knobs were connected to the rotary switches (this type): one of the two knobs, depending on the rotation step, connects different resistances allowing the measurement of voltage and current values on different ranges. The other knob, with every step, involved the activation of different circuits in order to operate the tester in AC or DC. I didn’t analyze it deeply because I was interested only to recycle the parts.
Depending on the rotation I wanted to read a 1 or a 0 on the Arduino pins. The rotation of the knob, in practice, terminates at each step a different switch.
The following diagram shows one of the rotary switches, a reed blue (longer than the others) carries the current on the central orange wheel that, turning the knob, closes or opens the circuits connected to the other blue strip: The needle that moves to report the measured values ​​is controlled by applying a voltage to both ends, marked with + and - (GND). I did some tests and found how to pilot it with values ​​of an Arduino PWM pin output by reducing the current with a resistor of 10kohm.
Making some tests I have established the values ​​to apply to move the pointer on the numbers from 1 to 10 of the central line.

But then I noticed that the interactions with the other components, with wifi, leds and sounds probably alter the current flowing toward the gauge precluding any precise use of the lancet. Probably it is necessary to build a filter that removes these variations and stabilizes voltage and current, but the lancet for me it’s only an aesthetic accessory.

Under the two knobs in the middle, there was a classical variable resistance, which did not work longer, fortunately, the modern ones have the same measures as those of sixty years ago so I could keep its cap and replace the old part with a new potentiometer.

I inserted two SMD LEDs, the flat ones, in the plug connections of external wires + (red) and – (black) of the tester.
I added a third SMD LEDs inside the little box of the needle gauge, it was not easy, because I wanted to enlighten a bit ‘the lancet without bump it.

To feed the three LEDs I had to use an ECB transistor, because the output current from an Arduino pin was not sufficient. I also put the potentiometer in series so the light can be doimmed at will.
With a fixed drill I punctured the box, which is really hard to insert the light sensor and the motion sensor (PIR) on the higher side of the box.

From an old toy I recovered a speaker and I found that with some libraries is sounds without additional components can be output, amplitude modulating the square wave which usually allows us to do only the bad beep. The result, though far from any sampled sound, is best and very effective in some cases, the sound of R2D2 Star Wars (taken here) and that of crickets (taken here) above all. The library to handle the sounds without additional components can be found here.

To use the meter as a clock and as an alarm clock I bought a dedicated Real Time Clock circuit, in the first time I tried to use a DS1307, but I was not successful, other online users say they are wrong modules and that you have to modify them to make them work by removing some resistances and shorting some pins, I have also tried this but the DS1307 remains a mystery to me.
Then I moved to a DS3231 RTC and with this module I was able to do everything, clock and alarm, but this didn’t solve the problem of how to change the time at which the alarm should sound, or how to adjust the time without reconnecting the Arduino. These controls, ie the two knobs on their own, without even a display if not a needle gauge, do not allow the construction of a simple interface for entering any parameters.
I then replaced the RTC with an ESP8266-01, separately programmed.
From the point of view of the software developed for the RTC it is enaugh to initialize the class with millis(), the internal clock function that every microprocessor has and, via the ESP retrieve the time from the Internet and adjust accordingly the time.

Although the Arduino Nano to which all components are connected becomes inaccurate, there is always the ESP that recovers the correct time from the Internet and updates the clock.

Communicating with the ESP throught AT serial commands is difficult. In the past year I learned how to program ESP8266 chip and replace the original firmware with my code, designed to connect to the Internet and running a mini web server to use as an access point to receive configuration. I then modified this project, thus creating an interface that allows you to insert the data to connect to the wifi home router, the site from which take the time, and the the alarm time and days when it should wake me up.
The ESP card, then, is connected via a serial connection to the Arduino Nano and is interrogated with a set of restricted commands that allows you to withdraw the data and activate the access point to configure the tester by a smartphone.

The project completed looks a bit messy, you can see the ESP8266 and the other parts (click to see bigger images): The list of required parts (for best prices you really should comb through Amazon, or, if you have time, look for them on Aliexpress or Banggood):

Here is a view of the inside of the tester, how it is now. Some components such as the photo resistor and the PIR can’t be seen since they are behind the Arduino. The Arduino Nano is covered with some isolating material to prevent short circuits between its top pins and the metallic case of the tester. There are some drops of hot glue used to keep the wires in a fixed position. Here is a picture of the circuit made in a vintage way, with paper and pencil, without Fritzing :)
(click on image to see big pic) I'm a software engineer, an everyday web developer and a maker. I usually build sites with PHP, within or without WordPress. I build Internet of Things with Arduino and ESP8266. I'm the founder of Rockit.it and Dailybest.it and I'm actually the Chief Technical Officer of Better Days web agency.

Pictures from the retrofitting of the old Lael voltmeter

Ultrasonic gun from a gun toy with Arduino

Guns are always bad, I don’t like guns. This is a summary of a project born to play. I’ve found…